Dedicated to “friend and composer Philippe Hurel”, this work was composed between 1993 and 1994. The continuo principle, written into the title without parentheses, alludes to or hints at the baroque writing technique. Of course, this is more in the sense of uninterrupted persistent pulsation than of figured bass designed to create harmonic environments. The continuo here evokes absolute continuity, built on entangled permanencies that support each other in the pursuit of a common endeavour. From this comes the alternate reading of the title, this time more of a moral, once we eliminate the parentheses (1).

The clarity of expression that characterizes the composer’s style hits a high point in this work. The continuity principle that drives the piece comes from a clear desire for logic. Every idea in the piece is deduced, either from an initial sound that already contains its own development, or from white-hot processes that burn bright and die out. But these movements, in reverse order should anyone wish to distinguish them, are always complementary in Continuo(ns). So, the work can be listened to as a sonic metaphor for the laws of the living world, in which some elements being destroyed are already producing new ones during the very act of vanishing. The continuity here is also restless, even if these spans of calm and suspense are numerous. Silence is a rarity in the score – there are at most, here and there, a few moments of respiration. What is indeed truly striking in this work, is the extraordinary variety in the sequence and appearance of the different sections, much like iridescent little tableaux. More striking still, is the way the composer has succeeded in stringing these actions together and how he managed to create the overall rhythm of the work, both sustained and articulated (2). One of Philippe Leroux’s most used techniques for achieving this result consists of exhausting every possibility of the figures chosen, either by reducing them to a single entity that occupies the full space of the base metronomic value, or by amplifying them and rendering them more complex until they burst – but always using simple arithmetic sequences.

(1) The work is the first of a trilogy that includes (d’)Aller for violin and ensemble, and Plus Loin for orchestra. The three titles form a single phrase [in English: Let us continue to go further]

(2) Continuity often comes from a masterfully constructed illusion: if the sections follow logically one after the other — a condition needed to create a general rhythm —, it is because the composer seems to foreshadow each section in the preceding one. The composition can be perceived as a begetting process, as a series of genomic actions in which the Alpha is telescopically merged with the Omega. 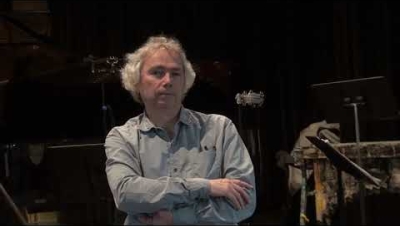