Called “a brilliant musical scientist” (CBC), “breathtakingly inventive” (Sydney Times Herald, Australia), and lauded for “creating a stir with listeners for her breathless imagination and ability to capture Gen-X and beyond generation” (Winnipeg Free Press), award winning composer and video artist composer Nicole Lizée creates new music from an eclectic mix of influences including the earliest MTV videos, turntablism, rave culture, Hitchcock, Kubrick, Alexander McQueen, thrash metal, early video game culture, 1960s psychedelia and 1960s modernism. She is fascinated by the glitches made by outmoded and well-worn technology and captures these glitches, notates them and integrates them into live performance.
Nicole’s compositions range from works for orchestra and solo turntablist featuring DJ techniques fully notated and integrated into a concert music setting, to other unorthodox instrument combinations that include the Atari 2600 video game console, omnichords, stylophones, Simon™, vintage board games, and karaoke tapes. In the broad scope of her evolving oeuvre she explores such themes as malfunction, reviving the obsolete, and the harnessing of imperfection and glitch to create a new kind of precision.

Nicole was recently awarded the prestigious 2019 Prix Opus for Composer of the Year. In 2017 she received the SOCAN Jan. V. Matejcek Award. In 2013 she received the Canada Council for the Arts Jules Léger Prize for New Chamber Music. She is a two time JUNO nominee for composition of the year. She is a Lucas Artists Fellow (California) and a Civitella Ranieri Foundation Fellow (Italy). In 2015 she was selected by acclaimed composer and conductor Howard Shore to be his protégée as part of the Governor General’s Performing Arts Awards. This Will Not Be Televised, her seminal piece for chamber ensemble and turntables, placed in the 2008 UNESCO International Rostrum of Composers’ Top 10 Works. Her work for piano and notated glitch, Hitchcock Études, was chosen by the International Society for Contemporary Music and featured at the 2014 World Music Days in Wroclaw, Poland. Additional awards and nominations include an Images Festival Award (2016), Dora Mavor Moore nomination in Opera (2015), Prix Opus nomination (2013), two Prix collégien de musique contemporaine, (2012, 2013) and the 2002 Canada Council for the Arts Robert Fleming Prize for achievements in composition.
Nicole was the Composer in Residence at Vancouver’s Music on Main from 2016-18.
She is a Korg Canada and Arturia artist. 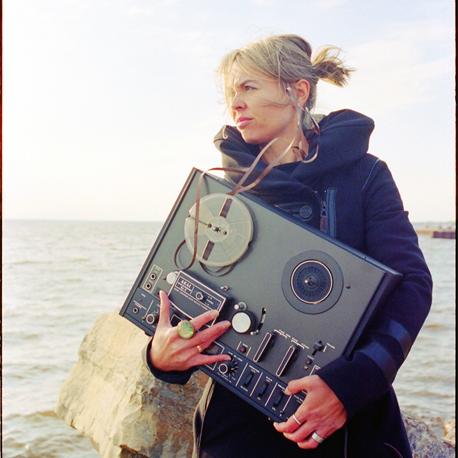